Following my father’s death in London in 1952, two Polish language newspapers – Myśl Polska (printed in England) and Słowo Polskie (printed in France) – published obituary notices. I was intrigued to read these and learn more about my father’s activities as a student in Poland and after he settled in England.

Below are excerpts from each:

On the 3rd June, Józef Czech, doctor of medicine aged 39, died at Woolwich Hospital after a short but serious illness. Former president of BPSUJ (Support Fellowship for Students of Jagiellonian University in Krakow), he was actively involved with Młodzieży Wszechpolskie¹ and Stronnictwa Narodowego (the Polish National Democratic Party)².

The funeral took place in Ipswich. At the graveside the president of the local SPK, Dr Grzędzielski, gave a speech. On behalf of the Polish National Democratic Party, Mr J. Płoski, president from London, expressed condolences and laid flowers on the coffin.

²  the opposition in Poland, outlawed after WW2 but continued in exile 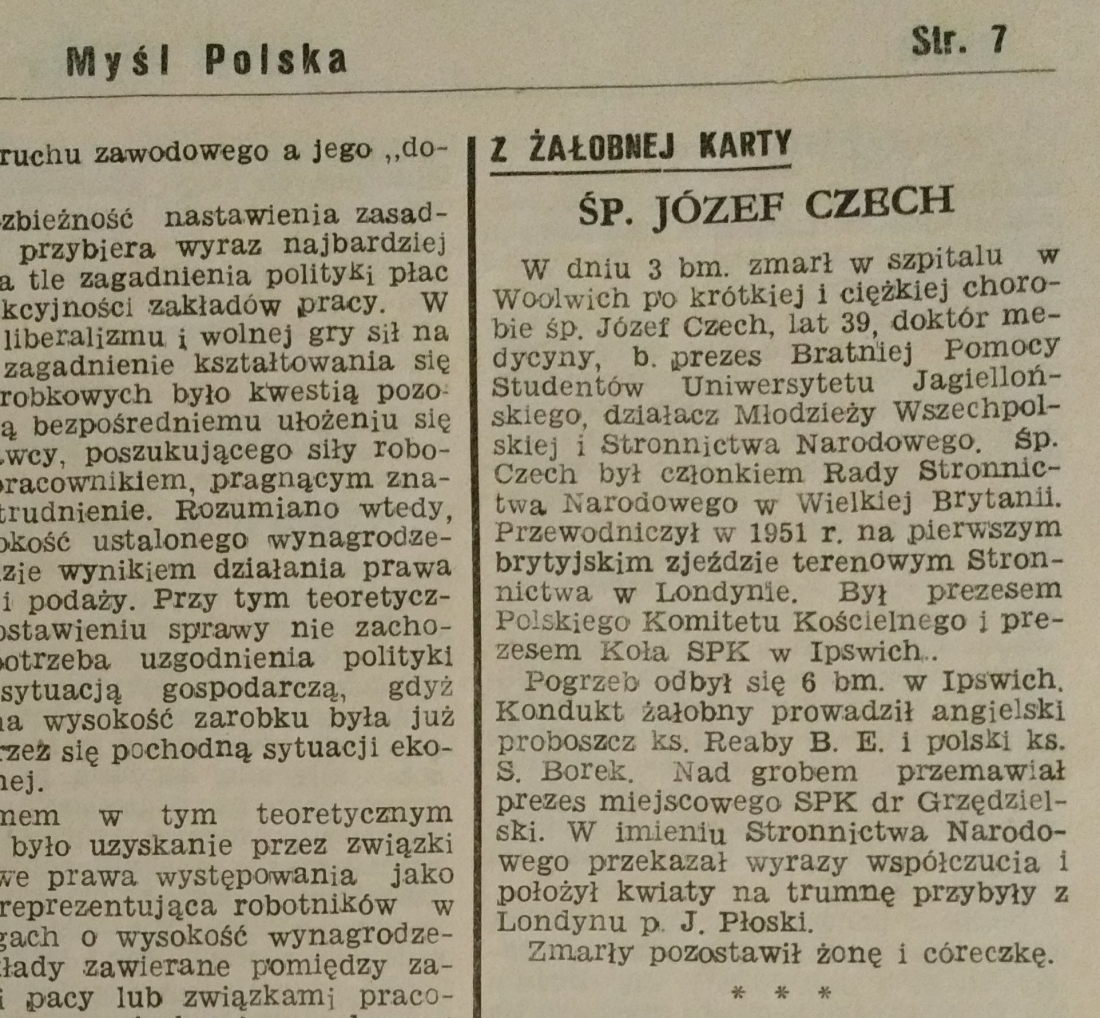 and in the French newspaper:

Following the completion of his studies at school in Rybnik, Silesia, Dr Józef Czech, the son of a Silesian farmer¹, devoted himself to studying medicine at the Jagiellonian University in Kraków. This period was a wonderful, formative time of his life. Despite the difficult material conditions in which he lived he was able to find enough time and energy to devote himself very productively to various national and community activities, in addition to his conscientious and diligent studies.

He was an active member of Młodzieży Wszechpolskie [see above] and was one of the founders and later president of the Polish student association Vratislavia, which brought together young students in Kraków who originated from Silesia. Later, in 1935 and 1936, he was president of Stowarzyszenia Akademików Górnoślązaków in Kraków – an association of cultural identity and mutual support for students from Upper Silesia.

After the termination of military operations in September 1939 in Poland, where he served as an officer cadet in the military health service, Dr Czech made his way to Hungary. Until the end of March 1940 he played an active role in establishing Związku Polskiej Młodzieży Akademickiej (the Union of Polish Students) and Katolickiego Uniwersytetu Powszechnego (the Universal Catholic University) for refugees in Budapest. The latter institution organised cultural and educational activities for Polish internees in Hungary.

Following this he took part in the fight in France in 1940.

¹ To the best of my knowledge although he had a smallholding, his main occupation was as a station-master.

View all posts by Jane Emms

One thought on “My Father’s Obituaries”